What Is An Annuity?

Annuity. When I say that word some of you have a reaction.

Sometimes it’s a positive reaction or it may be a negative reaction. However, that reaction is biased. It’s biased towards annuities.

As I get into this we’re going to explain the different types of annuities and where that bias comes from.

That’s not as important for us to just talk about it because we are all biased in different ways, shapes, or fashions. A bias isn’t necessarily good or bad. It might be based on our experience or what we have known, and it may or may not even be true.

I think we have different biases in this country. Let’s just look at it ethically.

We have a bias that black people tend to be more athletic and have better rhythm. At least I know in our family that is true.

We may think that Asians are better at math and science.

We all have different biases in different ways, but one way or another, it doesn’t mean that the bias is good, bad, right, or wrong or that there’s even any prejudice in it.

We may have biased on where we eat, which restaurants are best, or what cars we drive.

I know that some people are biased towards Ford and others say they only like Chevy.

We could go on and on, right? It is just something that is human and that we all have. We are all biased in some way.

With that in mind, let’s get back to the annuity. When we talk about annuity you have a reaction. Sometimes we see that people have a bias one way or another towards not just annuities, but any investments.

The thing that’s important to do is to make sure that a bias is accurate so that you are not keeping yourself from something that could help your financial portfolio or help you reach your financial dreams. 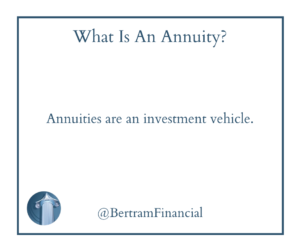 What Are The Different Types Of Annuities?

So let me talk about the different types of annuities. An annuity is an investment vehicle.

I want to take a minute and explain it because I think it helps if we really understand where that is.

If you do have a bias, maybe you’ve shut your mind off to some of the other options that are available. You may also be reading this thinking, I don’t even know what an annuity is. That’s okay too because this will be good information for you.

A few terms that you’re going to hear when talking about annuities is immediate or deferred.

Most annuities are deferred annuities. What that means is that once you invest in an annuity you don’t have to pay taxes on the money. That means that it’s tax-deferred.

Right now that works. If you have an IRA or Roth or anything, that’s the driver of the vehicle and it’s already going to be taxed the way the driver says.

Let’s just say you had money that you saved or you inherited somewhere. This is considered non-qualified. It doesn’t belong to an IRA or Roth. If you put it in an annuity, then the taxes are deferred and you don’t pay the taxes on the gains until you take them out.

This type of annuity pays an immediate amount of money. You might hear this and think of a pension. When you get a pension it is being paid through an immediate annuity. It’s a set amount of income either for a specific period of time or for life.

I haven’t talked to one person that doesn’t like a pension or didn’t wish they had a pension. Therefore, most people like immediate annuities.

On the flip side, you could take the money that you saved, put it into an immediate annuity, and create income from it.

That was a strategy that we’d used, especially in the past, before some of the other great income tools came out.

If you put your money in an immediate annuity and created an income, you could do a lifetime only income. This means that as long as you are alive you would get income. It would give you the highest income amount possible throughout that time.

However, if something happened and you got in an accident and then ended up passing away a few years later then there’d be nothing left for the beneficiaries.

This scenario can be upsetting to the beneficiaries, but remember that the purpose of those immediate annuities is to get the most amount of income possible.

When a company does that, it’s not that they’re keeping the rest of the money. It is just them recognizing that you’re sixty and creating income, but some people will live longer than the average life span and some will not. So if you have an immediate annuity and this works into your pension, and you took a lifetime distribution, then the only way that your money will be used is if you die early. They will pool it to distribute to the others who outlive you.

Now I’m going to talk about the other type of annuity which is a deferred annuity. This means that the taxes are deferred until we take any money out.

The deferred annuity class is a type of annuity that is common and is called a variable annuity. This annuity is like mutual funds sold into the annuity meaning that they have that tax deferral, but you can go up and down with the market.

Variable annuities tend to have higher costs associated with them because they do have to pay for the management fees as well.

There are fees built into this though. You have a surrender fee, which all annuities will have if you get out early.

Variable annuities do have different fees like that and go up and down with the market.

Again, I don’t like them. I don’t really work with them because in my opinion, either we are going to take a risk or we’re going to commit to a time when we’re trying to invest to make money. I don’t like doing both. I don’t like having the downside risk and having a time period that you have to stay with it.

The other two types of annuities are fixed annuity and a fixed indexed annuity.

A fixed annuity is like a CD that’s at the bank but is offered through an insurance company.

Usually, it’s going to be a little longer term, maybe three to five years, or even seven years. Also, the rates are a little higher.

The return is usually 1.5% to 2% higher than you’d get on a CD. So that’s just your traditional fixed annuity.

Next is the fixed indexed annuity. With this annuity, you have to remember the term fixed.

However, instead of giving you a fixed rate, they’re going to take what they would have given you and they’re going to use that to link returns to one of the major indexes, like the S and P 500.

In a nutshell, when they’re linking the returns if that index goes up, if the S and P go up, you’re going to get returns up to a cap or a percentage of what the gains were.

So maybe you get 50% of what the gains were now. Again, they didn’t invest all your money in there, so they’re not keeping the extra gains. It’s just that the way that they’re using to link the returns there.

They’re not going to get all the gains, but on the flip side, if we go down and we invest and are linked to the S and P 500, and the S and P goes down 20%, we don’t go backward. That’s where we say, zero is your hero.

So you have the ability to get higher gains than a fixed product when the market’s up, take zero off the downside.

There are two ways to make money. We commit to a time where we take a risk when we’re looking at a fixed or fixed index annuity, we’re committing to a time.

So we don’t have the downside risk of the market. Instead, we have a surrender charge period. That’s going to go down each year for a set period of time.

For a fixed annuity it might be three years, for an index annuity, maybe an average of 10.

And now you got you stumped thinking. You can’t, right, because it depends on what’s going on in the market that could have lost significantly could have gained. You really don’t know. There is no bottom dollar.

With an indexed annuity, let’s just say in five years, even in the worst case you can get out.

If the market was down every year for five years, we know we still have a hundred thousand because we don’t go down because of the market.

Without a shadow of a doubt, if you wanted everything back at that point, bottom line you’ll get $95,000.

When you think about it that way, those surrender charges really aren’t so bad.

The bottom line is that the reason they have them is in order to link it and get those returns. They have to know that the money is going to be there for some length of time and that determines what they’re investing in to get you those returns.

Do I Need An Annuity?

So that gives you a little bit of an education on what index annuities are. All the different types of annuities are what we call green money. We use it a lot.

They’re a great tool in retirement, but you don’t have to take my word for it. We have a couple of articles that are happy to send you a few like that. I just wanted to share with you David Babbel. He is a professor and did a big study on index annuities.

He found that a lot of times they outperformed some of their alternatives, which could be fixed accounts, bonds, things like that, and found that it could be a great option for those in retirement.

Another professor, Roger Ibbotson, conducted a study on using fixed index annuities as an asset class. 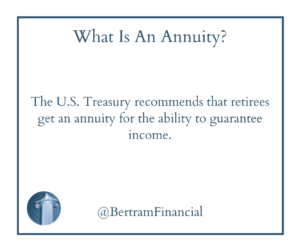 He has a lot of great points, but I’m just going to read you one because I think it makes more sense to use these.

He said that he presented the case for annuities as an important alternative to traditional fixed income classes, such as bonds. He also said that the recent innovations in annuity designs has given people competitive tools in the marketplace to help them prepare for retirement and create retirement income while also seeing growth.

In closing, even the U.S. Treasury recommends that retirees get an annuity for the ability to guarantee income, which we haven’t even really gotten into, but that is another feature of the index annuities.

As always, if you have questions, feel free to reach out and let us know. We’ll talk to you soon.