Risks and How To Protect Your Money & Retirement Income – Part 2

Trick or treating is coming up.

Did you ever think about that? Who would ever choose trick over treat?

Now I get it. It’s supposed to be that if you don’t give me a treat, I do a trick.

Nobody wants the trick, right?

However, sometimes in life, we get the trick instead of the treat.

What do I mean by that?

There’s a lot of risk in retirement for sure, and sometimes you’re tricked into thinking you are safe or that something you’re invested in is safe or protected when it’s not.

You don’t want to be tricked with your retirement.

Let’s talk about the bond risk and purchasing power and inflation risk.

So if interest rates rise, that affects bonds, it’s a teeter-totter effect.

Let’s go back to the colors of money because green money is often considered a bond alternative.

There have been some studies and white papers about using indexed annuities as a bond alternative as they help eliminate some of that risk that you have with bonds.

On the flip side, in any market, there are always challenges and opportunities. The bond market is no different. We did a call with Guy on this as well, taking a deeper look into the bond market. This would be a good time to go back and listen to that. 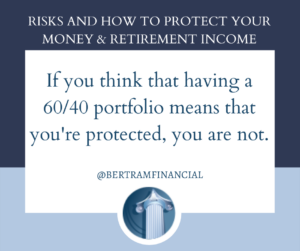 If you think that having a 60/40 portfolio means that you’re protected, you are not.

Yes, bonds won’t take as big of a hit as stock, but it doesn’t necessarily doesn’t mean you’re safe.

Plus you are also taking on another risk, whether it’s in bonds or you have a bunch of money sitting cash.

You want to be able to keep up with inflation and be making money.

CDs are no better, they are earning next to nothing.

Whether it’s in bond funds or CD’s, and you’re hardly making anything not keeping up with inflation, that is probably not the best thing!

Again, that’s where we want to go back to the colors of money and take a look at some of the green money because it is a great bond alternative. It’s right in the middle. Yellow money is the bank money that’s safe and available, but really making nothing right now and red money is at risk.

There are different green money options where, depending on the account and the type of money you could have a 100% liquidity option if you need it, and you’re still going to average a return of  4-6% a year.

So if you have lazy money, if you’re worried about keeping up with inflation, if you’ve had too much in bonds or too much in the bank, let’s talk and take a look at some alternatives that will fit your needs.

When we look at income risk we’re going to go back to the colors of money again. Green money is what can give you guaranteed income in retirement.

So if income stability is important and it’s probably a good idea that we have a portion of your retirement in green money to provide you guaranteed income at some point whether that’s now or in the future.

However, if we still have money in red and we’re taking income from it there are some things that we need to make sure we’re doing.

Whenever we’ve talked with Guy and we are taking income out, they’re going to make sure a couple of years of your income is not going to be affected by market volatility. We covered this more in detail in our Retirement Shift blog.

That is really important to provide that income stability and the way they do it, they’re able to generate more of a 5 to 6% return versus the 3-4% that is considered a safe withdrawal rate.

You could run Monte Carlo analysis until you’re blue in the face, but it really it’s about having a plan and making sure your income is protected in any period and that’s what Guy and his team do best.

Taxes and other Retirement Risks

We’ve done lots of blogs on taxes and suggest you can go back and listen to some of those if you are worried about taxes as we won’t be taking time to cover that here.

And as far as liquidity, each one of those colors of money has different liquidity options. You want to make sure you have enough available for anything you are planning to do and any emergency.

The last risk I want to cover today is bad choices.

Now, this didn’t necessarily make the list of retirement risks, but I think it should.

One of the things that I see most often hurt people is bad decisions.

Either they procrastinate and they don’t do what they need to do or somebody else is making bad decisions for them.

So if somebody is managing your money, but they’re actually not doing any management for you, that’s something that could hurt you in retirement. This is someone else making bad decisions, bad moves for you.

Consequently, you can make your own bad decisions,

I remember once talking to someone… We went through their personal benchmark and they were not where they wanted to be, plus they did not have any protected retirement income.

At that time, they had lost, their accounts were down.

They were taking more risks than they should, but they wouldn’t make a change at that point because they were down.

Fast forward six months, the market was up, but they wouldn’t make a change because the market’s up. They were going to stay in that yoyo cycle forever and not doing anything.

Maybe they’ll be OK, maybe they ended up taking too much risk and it hurt their income.

So how do make a decision?

Watch our ABC choice model. B is where you want to go, A is where you’re at and C is the consequences if you do nothing.

When doing this exercise, the why is important. It’s not just about dollar amounts, but what that will do for you emotionally and how it will impact your lifestyle.

Let’s talk and be sure you are protected from all the risks we have been talking about!