How the $3.5 Trillion Bill Affects Your Retirement

You’ve probably already heard lots of talk about the $3.5 trillion spending bill being talked about in Washington right now, and you might have wondered how it’s going to impact you.

The legislative risk facing Qualified and Roth accounts is significantly higher today than at any time in recent memory. And if you aren’t prepared, you aren’t protected.

I’m going to do something a little different today and I’m going to read you some of the thoughts from one of our experts, Becky Ruby Swansburg.

She’s the daughter of our actuary, Martin Ruby, and Becky actually worked in Washington at the White House and on Capitol Hill for a year, so she really understands the legislation and the legislative risk to your accounts.

She just sent out a white paper to advisors and I want to go through some of this today and read through it with you to get a better idea of what this $3.5 trillion bill is and what impact that could have on you and your retirement.

At a high level, this bill represents a significant change in the way Washington views saving for retirement. The House Democrats have stated one goal of this legislation is to “avoid subsidizing retirement savings” once account balances reach high levels. With this bill, Washington has shifted its focus from incentivizing Americans to save for the future to penalizing Americans who have successfully saved.

What Becky really talks about a lot is a legislative risk.

Legislative risk is the risk of Congress being able to change the rules and negatively impact you in your retirement accounts.

There is a risk that those laws will leave you with fewer retirement assets and less retirement income than you planned for.

First, we’ll take it a second and just jump into the tax provisions being talked about in the plan.

You might think that doesn’t apply to you, but listen here because there are some really important things that Becky highlighted.

Some in the media have suggested that savers with under $10 million in retirement assets don’t need to worry about the tax change in this bill. But this is where the talking heads don’t fully understand legislative risk.

We must consider not just the provisions being discussed today, but how those provisions may develop, expand, and change in the future. This is especially true for Qualified and Roth accounts, where new laws can take immediate effect. 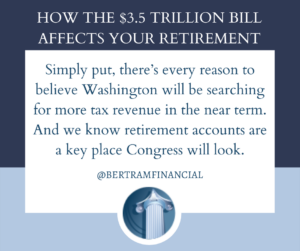 So the framework that is being put into this plan is allowing the House and the Senate to limit the growth and value of retirement accounts.

Once that framework is passed, then it’s just as easy as setting a limit. They might set the limit high now, but it will be easy to go in and change that limit in the future.

Simply put, there’s every reason to believe Washington will be searching for more tax revenue in the near term. And we know retirement accounts are a key place Congress will look.

So our job as fiduciaries is to help you just assess the risk, not just the tax risk, but also the legislative risk to your accounts.

One of the things we’ve talked about in the past, in fact, we actually talked about this in our August Financial Power Hour, is using IULs, Indexed Universal Life Insurance policies as a Roth alternative and being able to convert some of those taxable dollars to nontaxable. For those who are saving for retirement, using an IUL versus or in addition to an IRA, a 401K or ROTH.

An IUL is a contract between you and the insurance company. No matter what laws are in place when you start saving in a qualified account, such as an IRA, 401K, or Roth, Congress is able to change the rules at any time and those changes take place immediately.

So that being said, if you already have converted or started saving in IUL, they can’t go back and change the current contract that you have.

Becky and Marty have written a couple of books on this, The Holistic Retirement, The New Rules of Retirement Savings, and the No Compromise Retirement.

All of them which we have talked about and would love to get their resources in your hands because again, these are laws that once you have that contract, they can’t go back and change the rules. 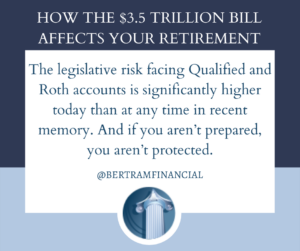 The reason this is so important is Becky says that “The legislative risk facing Qualified and Roth accounts is significantly higher today than at any time in recent memory. And if you aren’t prepared, you aren’t protected.”

Reducing legislative risk is a natural evolution of retirement planning.

That’s what we are doing now. If you are working with us, we’ve helped you address market risk and create a protected income plan.

We are constantly looking at tax risk and legislative risk is another risk that we really need to be looking to mitigate for you.

An  IUL can play an important role in protecting you from changes coming from Washington – now and in the years ahead.

If you have questions about this, please let me know.

Becky and the team have some great software to show you how to utilize some IULs going forward so you’re under contract, not legislative law.

As always, be informed on what’s happening just because they say it’s not going to affect you doesn’t mean it’s not.

On a side note, among other things going on in Washington right, there is something where they’re attempting to track any transaction over $600. I just got a note from a bank on this and they’re really pushing against that.

They feel like it is not Washington business for the banks to have to report every transaction you make over $600. Pay attention to what’s there and know what’s going on.

We can do our best, we can pray, we can vote the way that we think is best in Washington, but then what we have to do is we have to take care of our own accounts the best way possible.

Moving things from legislative risk to contract law is one of the great ways to do that!