How Is The Election Going To Affect The Market?

“How is the election going to affect the market?” That’s a question I hear continually, almost every day right now. And Guy, you’re probably getting the same questions. Right.

Wait, this is an election this year? Yes. It has been a very common concern for people or something that is on everybody’s mind. So inherently has to be on our mind as well when we’re managing portfolios.

I don’t care what side you’re on, everybody’s concerned about this. It’s not just this year, but any election year. So give us a couple of thoughts from your perspective with portfolio management and money management, what are you seeing? How do you think that this election could affect the market?

Yeah. The first thing that I’m telling people when we’re having these conversations is that as much as the political headline news is right up front, in everybody’s face, driving concern and anxiety, but when we actually take a deeper dive into what is fundamentally or structurally impactful for the stocks, it kind of pales in comparison to fundamentally what is happening with the federal reserve right now.

The federal reserve, you know as a result of COVID, made an abrupt change in March. They went from going from a somewhat hiking regime to proactively cutting rates all the way back down to the bottom lows, historical lows. But even more important than this,  what the market always is looking at in terms of forecasting and guidance, they have come out and actually strongly said that they are going to keep it at these low rates for the foreseeable future. They’ve even come out as strongly to predict a timeframe as long as two years from now, which they have actually never even come out and use that strong of language before. 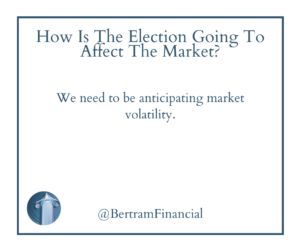 The fed being very accommodative with low rates and, very low, easy financing for these large market cap companies ends up being a very strong tailwind for stocks. In the short term, anything can happen with markets and volatility can hit, but when we’re looking at the extent of the volatility, I think that with the fed being where it is, it’s going to help build in a floor for stocks.

What we always need to focus on is making sure that you are positioned the correct way within the portfolios. We need to be anticipating market volatility and you need to have certain positions in there that will be offset at that time. That is also a very important factor for people that are feeling anxious because, as much as we’re seeing that there could be support for the equity market, it’s just having these other aspects in the portfolio will also help even if there’s short term volatility.

I think you mentioned something earlier that you’re doing behind the scenes. You’re analyzing if Trump wins or if Biden wins, and running what-if scenarios. Analyzing what could be affected and developing a plan so that no matter who wins, you know how you want to be managing. You know what positions you want to have inside portfolios to take advantage of opportunities and to mitigate or minimize volatility. Is that accurate?

That’s right. Yep. Now when we’re getting a little more granular because we are active managers. So with that, we have a little bit of forward-looking that we need to be doing, just anticipating certain events. The polls are showing one thing, but I think as we’ve all learned from 2016, you can’t really be relying on the polls. One scenario versus another could still happen here, but for our purposes with a Trump victory, there’s potentially not as many of those short-term concerns, most likely the market will rally off of that. So what we’re really been focusing on are the other scenarios.

Number one, if there is a Biden win, but the Senate still stays mixed or number two if there is a Biden win and a full sweep. What we actually do is screen through those particular scenarios and say what would be a negative impact to stocks in the situation of a full sweep, with a Biden win. At that point, he could potentially get through some of these tax reforms that he’s talking about. So inherently there are certain sectors that are going to be more tax-sensitive. We’re able to identify those, like the technology stocks and it’s consumer discretionary and the telecommunication stocks. Coincidentally, those are the three of the best performing sectors as of lately.

Those stocks that happened to have the most amount of gains right now. So we’re recognizing that and seeing that this could now be a headwind if there is a full sweep with the tax reform for these particular companies. On the other side, there’s always going to be a beneficiary, someone who’s benefiting from it because money flows from one to the other. It doesn’t disappear. What we’re seeing is that in that particular scenario, there could be the beneficiaries could be coming in the form of industrials and materials, because those are inherently tied more to be increased government spending and infrastructure build-out.

So the plan of action going into the election, we’ve actually already increased some holdings in those sectors, the industrials, and the materials, We know that they should really benefit if there’s a Biden win, but they should actually still do pretty well if Trump does win. But on the other end, if there is the Biden win, it may be a catalyst for us to start taking some of the profits that are in some of those technology stocks and other things that have nice gains and might be more affected by the increased taxes. So it’s just, there are a couple of other scenarios as well that have popped up that we’ve identified as well.

I think what’s really important to me and to our clients is you’re looking at it. So often you get the blanket answer, “Oh, it’ll be okay for the long run” or “You’re in it for the long run. It will be fine.” And while you said, the Fed’s doing some things where you see the market having a floor and doing well, even though there could be short-term volatility, so you don’t stop at that. You don’t just pat your clients on the shoulder and say you’ll be fine, if you lose 30%, it’ll pop back up. But you’re actively looking at where’s there opportunities where could there be problems and in doing a lot of what-if scenarios so you’re prepared for whatever. I think that that’s key. It’s key because then your clients don’t have to worry because you are. You and the team are taking all those what-ifs and running them so that your client isn’t sitting here having to worry about what will happen, they know you have a plan for whatever happens.

Absolutely. That is our responsibility. Yes. 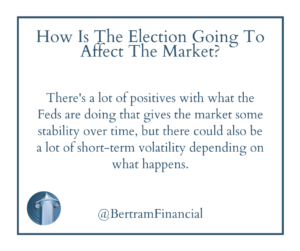 So I think that’s important to know, and if you’re not a client yet, don’t just sit and hold tight, that could be the absolute wrong thing to do. Without looking at your portfolio where you’re, how you’re situated, you might be holding things where you put yourself a lot at risk. It may be a good time to get a review and see where you’re at so you know, what are some of the obstacles that are ahead or what are the opportunities for you.

If you’re worried about it, then let’s let Guy worry and his team worry about it for you so that you don’t have to!

There’s a lot of positives with what the Fed’s doing that gives the market some stability over time, but there could also be a lot of short-term volatility depending on what happens. So you want to make sure you’re prepared. If your team isn’t doing it the what-if planning that Guy is or if they can’t tell you what they’re doing, it might be time to consider a change.