Hope. As I reflect on Christmas, and the meaning of Christmas, hope is a word that keeps resonating with me.

Maybe that’s because there’s a lot of areas in life right now that maybe feel hopeless or where we need help.

And I think that the same was true when Jesus was born.

You see, the period leading up to Jesus’ birth had been a long period, we’re talking hundreds of years, where there were no prophets. It was really kind of quiet. I’m sure to the Israelites, that God went silent.

Yet He had a whole plan and all the prophets before talked about Jesus coming, it just took time. 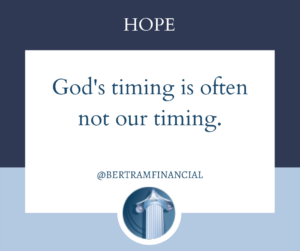 God’s timing is often not our timing. We say God is not early and not late, although there are usually times where He feels late in my book ;), but He’s the one in control.

Jesus was born in this time of Israel, it was a dark period where they were being oppressed by the Romans, where they hadn’t heard anything from God in a long time, and I’m sure they felt like the situation was hopeless.

Fast forward to today, and where there’s craziness going on all over the place.

There are things that could cause a lot of fear and anxiety in everybody and yet I think that this is the time that God wants us to have hope just as much now as he did then.

A couple of things that pop to me about the story of the first Christmas.

We know how the Angel spoke to Mary and Joseph and showed up with the shepherds, that Jesus was born in a Manger, and we know this story well.

However, back then, they didn’t know this story and honestly, most people missed the birth of Jesus.

He was born in a stable in a crowded town but they weren’t looking for him.

They weren’t looking for hope.

I think the same can be true with us in life.

Sometimes God is working and He’s doing awesome things right in front of us, but we’re not looking and paying attention and we miss it.

Reviewing the Christmas story, let’s look at a few takeaways that I think would be beneficial for all of us to learn.

They were humbly seeking God and they were willing to do whatever God asked of them.

I think that is one of the first ways we can find hope in our life and see God in our life; having a willing heart like Mary and Joseph.

God Cares for the Least of These

Then it’s the shepherds. They were the lowest of the low at that point in history and God spoke to them.

I think that it is important to remember that God is always with the low caste, the down and out, the poorest of the poor.

They are always in the heart of God and it is shown in the Christmas story when He just spoke to the shepherds and I believe it is still true today. God’s heart is for the poor and the least of these.

We went from shepherds having nothing to wise men with great wealth.

So know that hope still comes.

Hope is here today and Jesus is still our one and only hope.

We pray that you find your hope in Jesus this Christmas, that you have willing hearts like Mary and Joseph.

It’s my prayer every day, “God give me a willing heart to do what you want.”

Help me not forget the poor, the downcast, those who are marginalized by society or forgotten.

Help me not forget them because I know that Jesus doesn’t and that is a promise that I hold on to all the time.

Wise men (and women;) today are still seeking him and looking for Him.

And when it seems like things are crazy, He’s still working.

One of my favorite songs, if you haven’t listened to it yet, is Waymaker and one of the lines in there goes, “even when we don’t see it, he’s working.”

So even today, even if you don’t see it, I promise you God is working.

He has a plan and Jesus is still our only hope.