Green Money: The Best Kept Secret In The Financial World

Let’s take a look back at a subject that is worth being mindful of, and that is the various colors of money.

This week – let’s talk about green money, which includes fixed index annuities, IULs, and how you can have the best of both red and yellow money with this green money strategy which will help you with investing safely.

Let’s just imagine that you’re going to be taking a trip to Las Vegas and you get the option when you’re in these casinos to play some BlackJack.

Right now, there’s some of you who are like, “Oh my gosh, I would never gamble anything, I don’t want to play at all.”

There are others who plan to be there all the time.

And then there’s probably those of us in the middle who don’t really like to lose money, but it would be kind of fun to play and participate.

So what if I told you that there’s a BlackJack table where for every $10 bet you make if you win, you get $5 instead of the full $10, but anytime you lose, you don’t lose any money.

Now I don’t know about you, but I played that blackjack table all day long because I know I can’t lose. Yes, I might make only half as much on the upside of the bet, but I’m never going to take a downside loss. Well, that’s kind of what green money is like, which is what we’ll be talking about.

First, there are really three things that we can be looking for when investing; liquidity, growth, and safety.

Whenever you think about investing, you have probably considered these three objectives. Maybe you’re looking for somewhere safe to store your money, while also having the access to it. Maybe looking for it to grow as much as possible for the future. Maybe you want less risk and stable growth so you can take an income from it…

We’re looking for one of those three things, and again, there’s no method of money management or investment that meets all three of these investment objectives perfectly.

Personally, I believe green money is one of the best-kept secrets in the financial world because it gives us a little bit of all three of the investment objectives above.

Green is positioned right in the middle of yellow and red money.

We have the safety of yellow money where we’re not going to lose it all if the market goes down.

But instead of being stuck at the very low rates and returns in yellow money, green money allows us to link our returns to one of the market indexes. 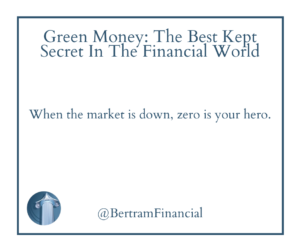 So, if that index is up, we get a higher return. If it is down, we make a zero that year. However, when the market is down and you made zero, the zero is your hero, right? You didn’t lose!

You’d much rather have a zero than a negative, so you have the safety that yellow money brings you, but you are going to potentially give up some of the gains.

The other thing we’re going to compromise on is we’re not going to have full liquidity with green money, at least not for the first few years. Depending on how it’s set up, you have limited liquidity, which allows you to access some of it.

For example, you could take an income when in retirement, or you could access a portion in a lump sum, but you cannot take all of it without paying a penalty.

Now I look at the surrender charge in green money as a good thing. Think about this, if I put the money into Red Money, like a mutual fund, and it is riding the market, could you tell me the worst-case scenario of what the value of that fund will be in five years?

The answer is, no. You won’t really know what will happen to that money in the market over five years.

So, while most of the time there are no penalties to take it out in red, you don’t know what your bottom dollar would be, but in green money, you always know what the minimum value would be.

I Don’t Want To Lose Money

Looking at green money, let’s say that you have a 10-year contract and the surrender charge starts at 10% and goes down 1% every year.

You know that you can’t lose, so the worst you’re going to make in a year is $0 no matter what happens in the market.

If I had that over in red money, I’m not sure what I would be able to take out because if I’m making zero in green, I’m probably losing in red, right? So, while there’s limited liquidity and penalties if you take it out early, it’s really put into context on whether that makes sense or not.

One of the biggest benefits of green money is being able to create a retirement income for yourself.

If you are retired or looking to retire in the next few years, this is a great benefit because now you know that you have this income coming in and green money can be like creating your personal pension. 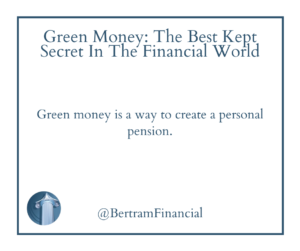 This green money is a way to take your 401K’s or other retirement accounts and create a personal pension but yet not lose access to that lump sum.

If you’re saving ahead and you’re still just trying to plan for your retirement, green money can be a great tool as well because you have some other options in green money such as IUL policies to be able to maybe grow things tax-free and have a more predictable retirement income.

So those are the different colors of money. We’ve covered yellow money, red money, and now green money.

Now I’ll ask, which is best for you?

It depends on your situation where you’re at and what your goals are right but.

With yellow money, we have safety and liquidity.

With red money we have growth and most of the time, we have some liquidity to it, but there’s no protection.

In Green Money, we have limited liquidity in the beginning, but we have safety. We can’t go backward and we have the potential for higher growth. I would say on average green money, you’re going to see between 3 to 6%.

Now pretend for a second that all your money is sitting on a table in front of you and knowing just those things.

How much would you put in each category?

Download select chapters from our book, including The Colors of Money to learn more about these different investment worlds and how advisors work in each.